Seth Ireland, seen in the photo below, died at the hands of his mother's boyfriend LeBaron Vaughn. Child protective services in Fresno California had received numerous calls about this child. They investigated but they could not find anything wrong according to news reports. 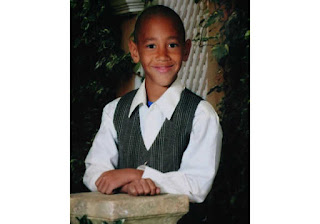 However, the father of Seth, Joseph Hudson, brought a civil liability action against CPS. Yesterday, the  jury awarded him $5 million dollars and Seth's step brother $3.5 million (US dollars). The jury appears to have found that CPS did not follow more than a dozen protocols and had also failed to investigate in a timely fashion.

There are many implications for child protection arising from a decision like this. Front line workers need to be aware that the quality of their work can be subject to intense external scrutiny with liability implications. Many have thought that CPS was immune to lawsuits for their work, but this may be changing.

That workers could be subject to intense public scrutiny is not news - consider the Phoenix Sinclair inquiry presently underway in Manitoba; the recent review of St. Andrew's Hostel Katanning in Australia as well as the Baby Peter case in England.

But front line social workers are the ones who may bear the brunt of public scrutiny, it is the funders of child protection services who should have the heaviest magnification on their decisions. They want increased effectiveness for decreasing dollars. You cannot expect that front line workers can be consistently meeting paperwork, face to face time with clients, investigation time lines and good case management if resources and funding are limited. As budgets continue to tighten in jurisdictions around the world, it will be harder and harder for front line to meet expectations.

This discussion cannot be complete without thinking about the highly complex reality of child protection investigations. People are able to successfully hide what they are doing for many reasons, such as:

Workers, often faced with huh caseloads will make miss cases for these and other reasons. No child protection system can eliminate child deaths. However, what the Seth Ireland case does do, is say that accountability will still exist and doing it right may matter when public scrutiny is brought to bear. Each time a child dies when CPS is involved, public scrutiny can be increasingly expected.
Posted by Unknown at 6:59 AM No comments:

I have become rather fascinated with the degree to which psychological testing has become the norm with assessments done for child welfare - child protection authorities in North America. In my research, it has become quite apparent that they have also become very common in England. I rather like the way on justice summed up the concern.


In my judgment, the principal issue for the judge was the mother’s parenting skills. If the judge was (exceptionally) minded to rely on the results of the personality tests, he had first to assess their validity, both generally and for the purpose of this case. The qualifications to the test results properly made by Mr Hunt in his evidence, to my mind, demonstrate that personality testing of this kind cannot be used to resolve issues such as parenting skills unless they are validated by other evidence. Lord Justice Arden, para 67

While I also use them in my assessment work, I am often astounded to see how often they add little to the assessment data. Indeed, there are many times when I see results on assessment measures that, when put into a clinical context, have less meaning.

Yet, there are also cases where the data has opened up an important new area of inquiry.

Many people who come for assessment in child welfare cases are so afraid of the implications of assessments that they yield "fake good" profiles. This occurs so often that it might be considered part of the child protection profile. And why not? There is a lot at stake for a parent in these assessments.

My greater concern is that many of these tools have not been validated on the very people that we seek to assess. The child protection population in Canada, is heavily skewed towards Aboriginal populations. Their presence within the norming population of the assessment measures is either absent or minimal. The same is true of many other population groups.

Soem might argue that there is some Aboriginal presence in some of the tests. Perhaps so - but consider that saying a Navaho has been included in the norming and therefore Aboriginals are included is like saying because a a Latino group in the the USA was included that all people from South America are now normed. The Aboriginal peoples of North America are as diverse as any other peoples around the world.

Canada, like many other parts of the world, are becoming even more culturally diverse. Migration around the world has increased. We see many in the child protection who come from elsewhere. English is not their native language. Many assessment measures do not reflect either their language or the context in which they understand such things as parenting dynamics.

Translations of assessment measures may not take into account the nuances of both language and context. A very simple example is the word blueberry. In Quebec it is bluete and in France it is myrtille.  But more importantly, measures present question in a socio-cultural context that immigrants and refugees may not appreciate.

There is very little effort that I am aware of in which norming of assessment measures have been done specifically on child protection populations.

Questions that needs answering in each case: why were these tests used? In what way did they pertain to this case? were these assessment measures appropriate to the questions before the assessors? why are these measures valid with this client? what was done to determine if the results are valid? were the results reviewed with the client? how did the assessor deal with things that the client did not see as valid? There are no doubt other questions but these act as a good way to determine how much weight should be given to an assessment report that includes assessment measures.
Posted by Unknown at 8:02 AM No comments:

There has been a lot of well deserved attention on the plught of women in India as a result of the high profile rape case that is presently before the coutrs. Research in India identifies that the rate of sexual abuse is bery high - over 50% of children according to the officicial statistics. But a new article in The Atlantic tells us that we in the west should save our smugness, if indeed there is any left after the likes of Cardinal Mahoney in Los Angeles, Gerry Sandusky at Penn State, Graham James in canada and Jimmy Saville in the UK.

However what the article describes is a large, secret problem in the USA (and probbaly in other western countries). It is the dirty secret we do not want to talk about. The article notes:

Here are some statistics that should be familiar to us all, but aren't, either because they're too mind-boggling to be absorbed easily, or because they're not publicized enough. One in three-to-four girls, and one in five-to-seven boys are sexually abused before they turn 18, an overwhelming incidence of which happens within the family. These statistics are well known among industry professionals, who are often quick to add, "and this is a notoriously underreported crime."


The repotr helps to show how significantly under reported sexual abuse is thus causing one to wonder about under repotring. It also notes that the prime place where sexual abuse takes place is within the family systems.

This is a conversation that we need to have but for which child protection and criminal justice systems are woefully unprepared to have at this scale. One can only imagine the impact if more and more victims begin telling what has and is happening. Yet, that is precisely what we need to encourage. The more the secrets leak out and victims can see society respond supportively, the safer it becomes for victims to disclsoe.

The notion of the family as the primary unit of our society makes sense but only when that has a foundation of safety, nurturance and oportunity for growth. Sexual abuse provides just the opposite.

The Atlantic article is worth a read.
Posted by Unknown at 11:09 AM No comments: