Learning from the death of Alex Gervais

This CBC story about the death of Alex Gervais helps to continue our needed conversation of how we can learn from the deaths of children in care.


Alex Decarie-Gervais' tragic life in the care of B.C's ministry of Children and Family development is the result of a series of missed opportunities by child protection officials, according to his family and at least one expert in social work.

"The system let him down by refusing my aunt the capability of adopting him," said Christopher Decarie-Dawson, Alex Decarie-Gervais' half-brother, from his home in Hull, Quebec. 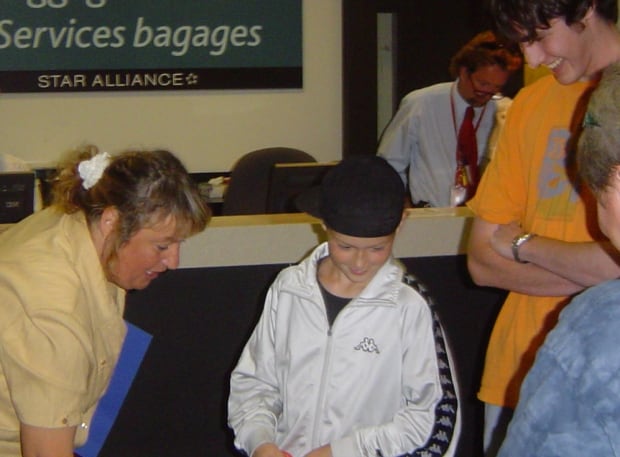 Alex Gervais arrives in Quebec in 2008 to visit his half brother Chris and Aunt Line Decarrie, who tried twice to get custody of him. (Line Decarie)
Decarie-Dawson remembers a week long visit with his younger brother in 2008 when Alex was just 10 years old.
Social workers arranged for the boy to leave his foster home in B.C. to visit their aunt's lakefront home in Quebec.

Missed chance at a normal childhood

"I spent the week with him. He was very nice but very on edge and very jittery … he was very fidgety and anxious," remembered Decarie-Dawson, who, eight years earlier, was born to the same mother as Alex.
It's not clear how many foster homes Alex had been in by then. 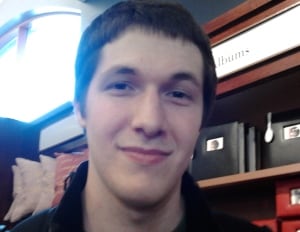 Christopher Decarie-Dawson says he tried to reach out to his little brother, Alex Gervais, for years, but social workers would not help. (Christopher Decarie-Dawson)
His placement, at age 18, at the Super 8 motel in Abbotsford, where he jumped, or fell from a 4th floor hotel room Sept 18., was his 16th in B.C.'s child protection system.
"The system let both of us down because I've gone through the exact same thing. I was abused by my mother as well, but I got lucky that I was taken by my father who was not sick," said Decarie-Dawson, who says his mother was diagnosed with schizophrenia and was unable to care for him or Alex.

Aunts attempts to get custody failed

The elder brother credits his aunt, Line Decarie, for saving him and helping his father gain custody. 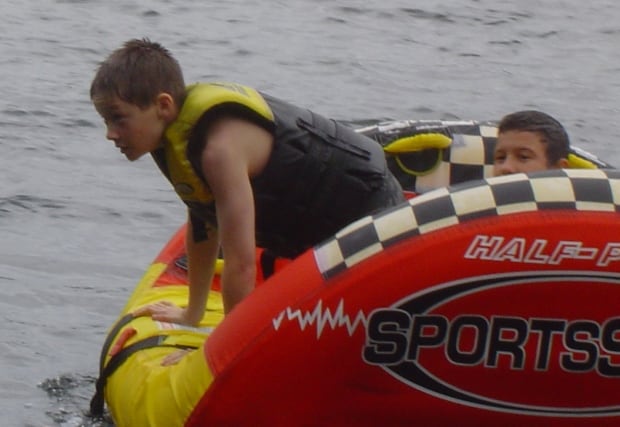 A then ten year old Alex Gervais enjoys an afternoon tubing during a visit prior to Aunt's failed adoption attempt home in 2008. (Line Decarie)
He is angry her attempts to adopt Alex were blocked by B.C. officials who "refused to give custody to (her) because his father was still around, still alive."
Line Decarie first tried to gain custody of her nephew years earlier, when Alex was four.
She says police called her to tell her he'd been thrown down a flight of stairs by his father but an Ontario judge decided to give Alex's father a second chance. 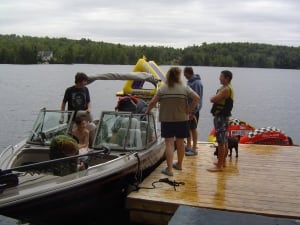 Alex Decarie-Gervais (seated), then 10 , enjoyed riding his cousins's boat and spending time at his Aunt's lakeside home in Quebec in the summer of 2008. (Line DeCarie)
"Alex's father had mental health issues. Why they gave him full custody of Alex I don't understand up to this day," said Decarie, who lost touch with her nephew for several years when his father took him to B.C., where he ended up in foster care.
The Decarie family didn't see him again until he visited their home.
At the request of CBC News, Decarie dug through boxes to locate photos of that trip.
Images of a timid child tubing on his uncle's boat, bonding with the aunt who wanted to be his adoptive mother, and being embraced by relatives paint a picture of a childhood that could have been much different.

The family says it was more than willing to adopt Alex, so long as it had assurances his father would have no contact.
B.C. social workers refused, and the Decaries lost all contact with Alex.
The next time child protection officials called the family would be to notify them of his death says Decarie-Dawson.
"Because he was in the foster system, so we couldn't get a message to him; we couldn't even find out if he was still alive until we found out that he died," said Decarie-Dawson, angry his brother was placed alone in a motel for nearly three months.
"I'm appalled about what has happened to him.  He should have had help. He should've had someone to call."
B.C.'s Ministry of Children and Families would not answer specific questions about the adoption attempt citing privacy law.

"There might be some missed opportunities," said Dr. Peter Choate, professor of social work at Mount Royal University in Calgary, who has testified as an expert witness in more than 100 child protection cases.
He says social workers are trained to preserve families, but some give too much preference for parents over aunts and uncles. 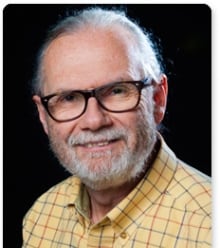 Family preservation sometimes means social workers are biased toward parents in custody decisions says Peter Choate, professor of social work at Mount Royal College in Calgary. (Mount Royal University)
"We can be too biased at times towards biological parents and not contemplate what other opportunities may be there that would serve the best interests of the child," said Choate.
He believes there is a lot to learn from reviewing Alex Decarie-Gervais's case.
"Why did we want to keep Alex in contact with his biological parents as long as we did?"
"Did we do enough assessment to see the impact of mental illness on the capacity to parent?"
Choate hopes an independent inquiry will answer those questions, though he warns against a "witch-hunt" against social workers, who have a tough job.
"You are working with the unpredictability of human behavior … the public has to recognize that these are human beings engaged in very human work."

http://www.cbc.ca/news/canada/british-columbia/alex-gervais-s-tragic-life-defined-by-missed-opportunities-1.3372859
Posted by Unknown at 10:47 AM 2 comments:

The effects of parental incarceration on children

I have written in the past about the impact on chidlren of incarcerating parents. A couple of new reports in the United States highlight the concerns.

The first report Parents Behind Bars: What Happens to the their Children? really emphasizes that the impact of incarceration on children is not a central part of the conversation. This means that, as a society, we are not talking about the fragmentation of families, the loss of the parent figure, the deterioration of economic and social position and the costs to society when the children are marginalized in this way.

The report is reminiscent of the Adverse Childhood Experiences studies when the authors note:

Previous research has found connections between parental incarceration and childhood health problems, behavior problems, and grade retention. It has also been linked to poor mental and physical health in adulthood

After accounting for effects associated with demographic variables such as race and income, we found that parental incarceration was associated with: • a higher number of other major, potentially traumatic life events—stressors that are most damaging when they are cumulative; • more emotional difficulties, low school engagement, and more problems in school, among children ages 6 to 11; and • a greater likelihood of problems in school among older youth (12 to 17), as well as less parental monitoring (pp.1-2)


The report suggests that looking at why and how we incarcerate is important but also says that we must begin to think more carefully about the ways that we support and intervene with the children. There is very little research (and perhaps even less evidence based programming) on how to work with this vulnerable population.

The second report, Removing Barriers to Opportunity for Parents with Criminal Records talks about the implications of having a criminal record.  The report notes that the United States leads the world in arrests and incarceration so their experience can act as an important source of learning for us. The report notes:

While the effects of parental incarceration on children and families are well-documented, less appreciated are the family consequences that stem from the barriers associated with having a criminal record, whether or not the parent has ever been convicted or spent time behind bars. A child’s life chances are strongly tied to his or her circumstances during childhood. Thus, these barriers may not only affect family stability and economic security in the short term but also may damage a child’s long-term well-being and outcomes.


The report also helps us to see the effects across all important domains in a family's life: 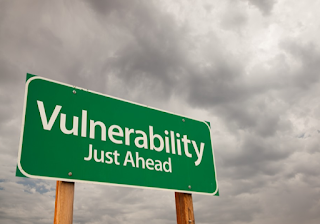 Income. Parents with criminal records have lower earning potential, as they often face major obstacles to securing employment and receiving public assistance. • Savings and assets. Mounting criminal justice debts and unaffordable child support arrears severely limit families’ ability to save for the future and can trap them in a cycle of debt. • Education. Parents with criminal records face barriers to education and training opportunities that would increase their chances of finding well-paying jobs and better equip them to support their families. • Housing. Barriers to public as well as private housing for parents with criminal records can lead to housing instability and make family reunification difficult if not impossible. • Family strength and stability. Financial and emotional stressors associated with parental criminal records often pose challenges in maintaining healthy relationships and family stability (p.2)


It's a topic that deserves more attention particularly focusing on helping families and children manage the changes, stay connected and build resiliency to face the impacts of involvement in the criminal justice system.