A Serious Case Review was published this past wee into the death in the UK of Hamzah Khan. She was profoundly neglect and when police entered the home, the partially rotted corpse was found. This is a disturbing case from several perspectives - a very unhealthy mother who was in no position to raise a child is a theme at the core of the this case. 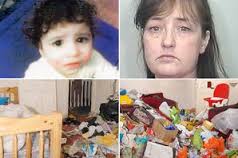 The National Society for the Protection of Cruelty to Children (NSPCC) in the UK summarized the SCR stating that the issues include:

Maternal history of: alcohol dependency; depression; social isolation; domestic abuse; and reluctance to engage with services. Issues identified include: invisibility of children to education and health services; failure to take into account the impact of domestic abuse on children; absence of enquiry into the cultural and religious complexity of the family;  insufficient significance given to disclosure by adolescents; lack of professional curiosity; insufficient interagency cooperation. Themes for learning include: cognitive influence and human biases; viewing incidents in isolation and failing to identify patterns that represent harm to children; and tools for effective sharing and analysis of information.


These are powerful lessons indeed. The Daily Mirror noted that it was a neighbourhood police officer responding to a neighbour's complaint who ultimately led to the discovery. The police officer was persistent - a behaviour that should be considered essential for those working in the areas of child abuse and domestic violence.  The Daily Mirror also quotes the SCR author stating:

Very sadly, I cannot give assurances that a tragedy like this will never happen again in our country - as we can’t control or predict the behaviour of all parents, the vast majority of whom are doing their very best to care for their children.

The reality is just that. Even the best of child protection systems will not prevent all deaths for quite a variety of reasons. These include that we cannot see into every house. As well, there are clients who feign cooperation but do not actually follow through with interventions. Then there are the cases where the parent behaves unpredictably or the interventions simply don't work.

Another SCR was published this past week in the UK that reminds us that domestic violence is intricalty connected to child abuse. Perhaps more importantly, is the reminder that these issues are not unique to the more disadvantaged populations. Child protection and other professions can develop a bias when approaching a family that is more advantaged and can have the appearance of success. The facts of the case need to be considered. As the NSPCC noted:


These cases remind us that errors can repeat themselves. Followers of this blog will see some familiar themes. Thus, we must continue these conversations and do so widely creating a broad reminder of what good practice can look like.
Posted by Unknown at 10:13 AM No comments:

The question of children who grow up in the foster or group care system has been a haunting one. The answers are too often discouraging. Long term research continues to tell us that these youth are more likely to end up homeless, poor, mentally ill, involved in the criminal justice system and be parents of children far too early. There are of course, exceptions. Many of us who have worked in or around the child protection system know the exceptions.

I have had former foster and group care youth in my classes at university. I have met some who have managed to create careers in the trades. This is partially because of good planning and caring adults who saw these youths into adulthood.

Increasingly we are seeing that young people from all sorts of family situations are taking longer to transition into adulthood. They stay at home longer, they take longer to establish themselves in careers and they will have a harder time affording their own house. Even those who come from relatively advantaged environments face these challenges. Those who have grown up in care face much greater obstacles as their support systems are often weaker.

Making the point is a video which is making the rounds.  Aging out

You Tube has many other such videos.

In an environment where the income gaps between the rich and the rest (the famous 1%), the pressures on the most vulnerable will grow. Those in foster and group care are amongst the most vulnerable. We must challenge the policy makers to recognize this and create programs that do bridge the transition as strongly as possible. Many jurisdictions are trying to tackle the problem with a variety of creative programs. More options are needed. Perhaps one discussion worth having is, that if society as a whole sees more kids staying at home longer into adulthood, why would we not expect that this vulnerable population will not also require such supports which significant extension of foster care would create? It's a tough question in environments where governments are into austerity. But what does it cost us to have these youth unsuccessful and placing demands on our health care and justice systems?

Fortunately, we are seeing fewer children in group or institutional care in Canada as seen in the following charts from the Canadian Incidence Study: 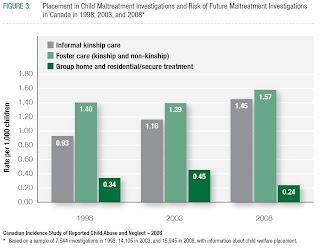 These help us to realize that policy changes can shift what happens, although the data also tells us that the rate of involvement with child protection in Canada is growing. The growth of kinship care may mean that there are more family members who will be there for the child over the long term.

American data is also quite informative about what happens to kids as they come into care: 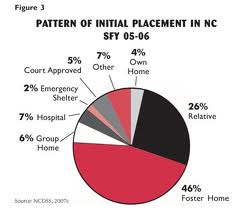 Some UK data adds to the debate: 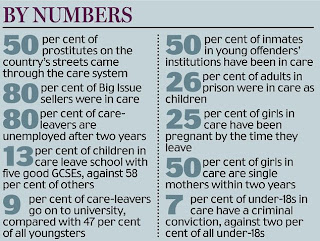 The point, of course, is that we need to have the debate. What we have now is not working that well whether we are talking Canada, the USA or the UK.
Posted by Unknown at 10:06 AM No comments: