Jeffery Baldwin died in 2002 in the care of his maternal grandparents. The case received intense media attention at various times over an almost eight-year period. Along with other public documents, the media coverage permits an analysis of the practice errors by Child Protection Services that are related to the failure to protect Jeffrey. Nine key themes emerged around core child protection practices: opening a file; the role of prior knowledge; issues related to assessment; knowing the child and their needs; the role of culture; case supervision; the child as the client; the enmeshment of child abuse; and the role of stability and healing. This analysis offers key lessons to be learned from such cases.

This article has been published in Child Care in Practice
Posted by Unknown at 9:42 PM 1 comment:

The Canadian media has been buzzing with the trial of Jian Ghomeshi. He is a former broadcaster with the Canadian Broadcasting Corporation (CBC). There were women who came forward to tell of their allegations that sexual activity with Ghomeshi was not consensual. He was fired from the CBC and charged with several offences.

The trial has been high profile. It is perhaps the way that the women have been treated in the court that is the most sensational story. Their behaviour has been dissected in salacious detail. The women have been on trial as opposed to Ghomeshi who did not testify in his defence. The challenge is that victims of sexual assault suffer from memory distortions, enmeshed relationships, shame and guilt and a tremendous amount of fear about how they will be treated by friends, family and the community. The intense cross examination they received in court will have only added to these fragile emotional states. Stories from victims are typically disjointed and often have inconsistencies in them. 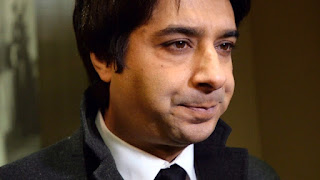 We await the decision of the court in March.

However, the real lesson here is for other victims. There is little value in coming forward with your story. You will be treated badly. Your story will be challenged in a way that will go to the heart and will be discredited.

A good look at the memory issue can be found in this CBC story. What is important as a take away, is that traumatic memories are not formed and recalled in cohesive, through ways but more as the essential essence of what took place. By comparison, cross examination in courts will focus on minute details, inconsistencies, contradictions and things forgotten. In other words, cross examination will use the very weaknesses of traumatic memory as the basis to discredit the witness.

The second story comes out of the Vatican. As Time magazine reports (as do many other news outlets)

The Catholic Church is allegedly telling newly ordained bishops that they have no obligation to report child-sexual-abuse allegations to law-enforcement officials, saying instead that the decision to take such claims to the authorities should be left to victims and their families.


Given that the Roman Catholic church has been plagued with sexual abuse scandals for decades now, this announcement is somewhat incredulous. The Church is shifting responsibility off to the victims. Many victims will find that obligation onerous. It takes tremendous courage to come forth with sexual abuse allegations but now the victims are being told they must carry the burden further and make a separate decision to bring in the police. That is a lot to ask of victims. Again the Church is failing its victims. 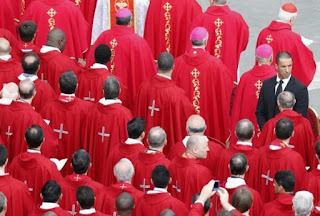 However, there is a story here that is getting missed which is the obligation in many parts of the world to involve the authorities via child protection. A common theme through much child protection legislation in the developed world is that of mandatory obligation to report when a child may be at risk of harm. Most often that is thought of as a caregiver but priests, nuns and brothers often act in roles of parents in schools, orphanages, athletics and so on.

We see in Canada how the Church engaged in sexual and physical abuse of First Nations children in the Residential Schools for decades. Those children and their families lacked the capacity to get action. This should be remembered. The obligation to act should rest with the institution on whose behalf the cleric acts.

Both of these cases highlight how society continues to fail in their obligation to protect people from sexual abuse and assault. The clear messages are that victims will have to struggle to be heard, believed and protected from further abuse. 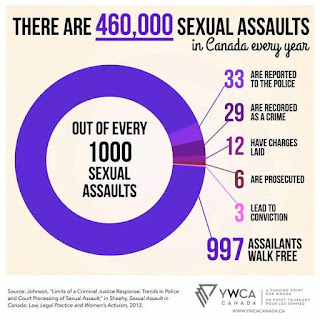 The graphic above shows very clearly that we have not created an environment where sexual assault can be spoken about. These two stories add to the power of silence. Even if Ghomeshi is found guilty, the trial has sent a clear message to victims, telling the truth is very hard to do and the way in which the case will be managed may do you a lot of harm.

The Associated Press reports that, since the course noted above for Catholic clerics:


Pope Francis' top adviser on clerical sex abuse says bishops have a "moral and ethical responsibility" to report all cases of suspected rape, molestation and other abuse to police — even where local laws don't require it.
A statement released by Boston Cardinal Sean O'Malley goes beyond the Vatican's current guidelines for bishops. Those 2010 guidelines say bishops and superiors must report suspected cases where civil reporting laws require it.
O'Malley, who heads the pope's abuse advisory commission, issued the statement after a recent course for new Catholic bishops on handling abuse cases featured a French monsignor who reportedly said bishops don't have to report cases. He said it is up to families and victims to do so.