Blame the worker or blame the system?

There is a case unfolding in Richmond, Virginia in the USA in which several child protection files may have been closed improperly. There is a possibility that this has placed a number of children at risk. The story has been reported in the Richmond Times. What strikes me is the way in which the media can so easy seek out the social worker scapegoat. They named the social worker.

Yet this story also raises the oft repeating themes of too many cases, too few workers and weak management. What matters for me here is the ways in which workers could not seek out their leadership to gain support. Rather, they started to fly on their own as they seemed to fear the repercussions of supervision.

If there is a strong lesson to be learned from the multitude of death review that have taken place in numerous countries it is that effective supervision can be a protective factor. When workers can go to their supervisors and review what is happening with cases, then they are able to get a different persecutive on the case. This opens up options and can improve case management.

This case should help us to reflect on the power of good supervision. Even if, as the news report suggested, the worker acted on her own, one has to wonder about the divide between supervisor and worker that the system would allow such actions to take place without alarms going off. This says a lot about how a system should work that was not happening here.
Posted by Unknown at 2:50 PM 5 comments:

In a rather stunning verdict, the Italian Supreme Court has overturned the conviction of a 60 year social service worker, Pietrio Lamberti,  for having a sexual relationship with an 11 year old girl. The reasons are reported to be that the lower courts failed to consider the amorous relationship and the consensus between the two. In some fashion, this is seen as justifying the relationship.

This seems astounding for several reasons. The first seems to be that many victims of sexual abuse can feel good in some way about the relationship. It can make them feel special and they may receive treats that others do not. In this case, the girl came from a poor family.

Even more important, is an 11 year old really capable of consenting to sex with a 60 year old? There is little reason to believe that such consent could be valid. The age difference creates a power differential. A child of this age (and she is clearly a child at that age) cannot really appreciate what she is consenting to.

In rather classic fashion, the social worker is reported to have gained the trust of the family. This is grooming behavior.

In this case, the court appears to have failed to understand the true nature of child sexual abuse. They have been hoodwinked by the kind of rationale that pedophiles create. How unfortunate.
Posted by Unknown at 4:15 PM 2 comments:

Child protection workers are often faced with the dilemma of abuse cases where the child simply won't confirm that the abuse took place. Part of the reason can lie in the way in which the child is asked. In an article by Reder and Duncan (2004) in the UK, they note that CPS workers are often not properly trained in how to actually talk with and interview a child. This may partially explain why some of the really high profile cases of child protection failures have included a failure to see and/or interview the child.

Yet, there is more to it. In a rather interesting article soon to be published in the journal Child Abuse and Neglect Israeli authors Katz & Barnetz remind us of some very important issues but place a new light upon them. Those children who are the recipients of physical abuse seem to less likely to dispose as the are so reliant on the parent for the essentials of life. More resistance may be encountered as the child ages. What I found rather disturbing in the research, is the ways in which some victims of physical abuse incorporate the abuse into their life - accommodating it and taking ownership of it.  They gave as examples:

“Daddy was yelling on me because I didn’t do my homework, so I told him I am sorry you are right and brought himhis belt.”


“I knew that after he is drinking he will be looking for me, so I went there and set next to him. . .after he finishedhitting me I took him to his room so he will rest a bit.” 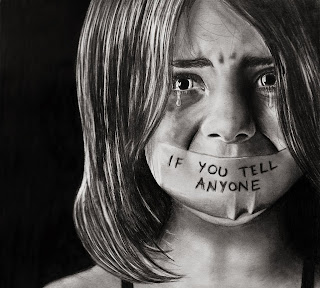 One can hardly see a child who has so accommodated the abuse into their living reality being easily open to disclosing the abuse. As the authors go on to state:

These narratives stress the unbearable situation for the children: they know when the abuse will take place, by whom,and how, and they have no real power to end it or to prevent it from occurring. In other words, they expect their fate andlive with/near this tragedy


They also found that when a child is being sexually abused by a parent, the child will have a greater tendency to accommodate the abuse. This seems to be particularly true when the sexual abuse is of higher severity. Lower levels may see more fight or flight behaviours.

Thus, when a child is going to be interviewed about abuse, it is vital to understand that the child may well be accommodating the abuse as they do not feel a power to do otherwise. This can have profound implications for interviewing the child. It also strongly re-enforces that the interview should be done by someone who is skilled in the task. Poorly done, one can easily imagine how that child will lose faith in the potential value of disclosing.

It would require a great deal of effort for a child to disclose when they have accommodated the abuse into their reality. They may not believe that it can be otherwise and would see no reason to try and create change given that.